A new Technique for the Seismic Retrofit of Slab-Column Connections

Reinforced concrete flat plate structures are widely used as structural systems because of their low storey height, ease of construction, better architectural appearance, and low construction costs. However, when exposed to large vertical forces or horizontal deformations, especially during an earthquake, this type of structure is vulnerable to punching shear failure at the slab-column connections. In some cases, the failure of a joint may cause the failure of the adjacent joints, triggering a progressive collapse of part or even the entire building.

The most typical methods of mitigating punching shear failure at a slab-column connection are:

The first two methods are effective in increasing punching strength, but not ductility. Adding shear reinforcement increases both strength and ductility, and it is also the most practical way of retrofitting existing slab-column connections.

The installation of shear bolts/studs, however, increases the joint strength and stiffness considerably, resulting in high seismic forces attracted by the joints, for which the existing columns might not have been designed for. Alternatively, improving the deformability of the joints, without increasing their stiffness, would result in a better response of the flat-plate system. A shear retrofit technique that allows larger, but limited opening of cracks, without hindering the punching strength of the connection, would introduce these desired properties.

Such technique was designed by introducing flexible washers into the shear bolt assembly (Fig. 1). The flexible washers allow for shear crack opening during the lateral displacements, while at the same time provide control of the crack width by using the appropriate washer thickness and/or stiffness. This connection behaviour would allow for a more efficient capacity design of flat plate systems by distributing strength and stiffness more appropriately. 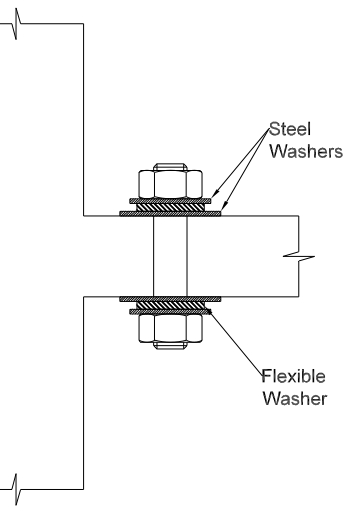 (One specimen without retrofit, one with steel bolts only and four with the anchorage-controlled assembly)

The presented system was designed for slab retrofit, however, it can be anticipated that the same idea can be used in the construction of new slabs in seismic zones as well.

More details and numerical analyses may be found on the PhD Thesis at https://uwspace.uwaterloo.ca/handle/10012/9977 from the University of Waterloo website, or by contacting Delta Innoveering.